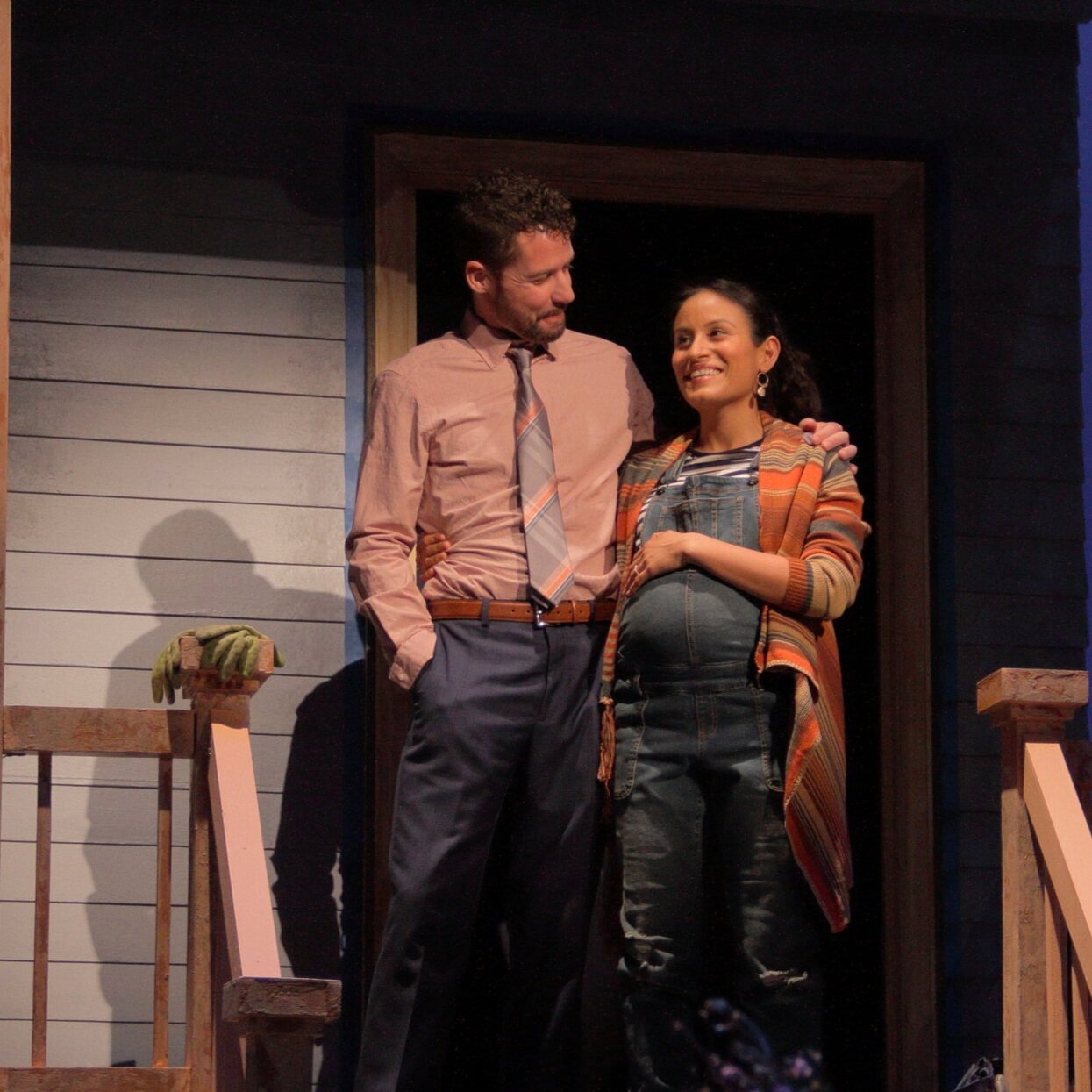 Each year, Americans observe National Hispanic Heritage Month from September 15 to October 15, by celebrating the histories, cultures, and contributions of artists whose ancestors came from Spain, Mexico, the Caribbean, and Central and South America… 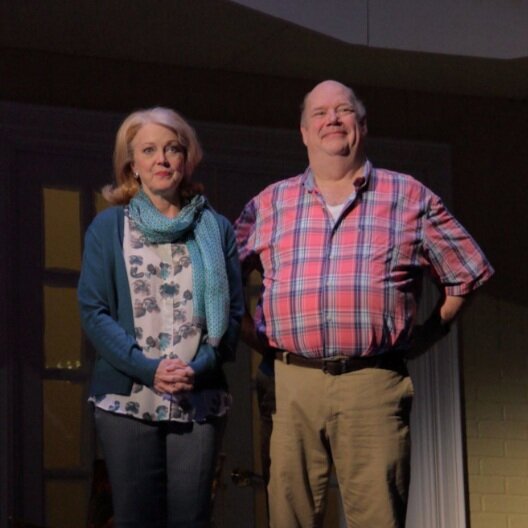 Check out the photos from NATIVE GARDENS! 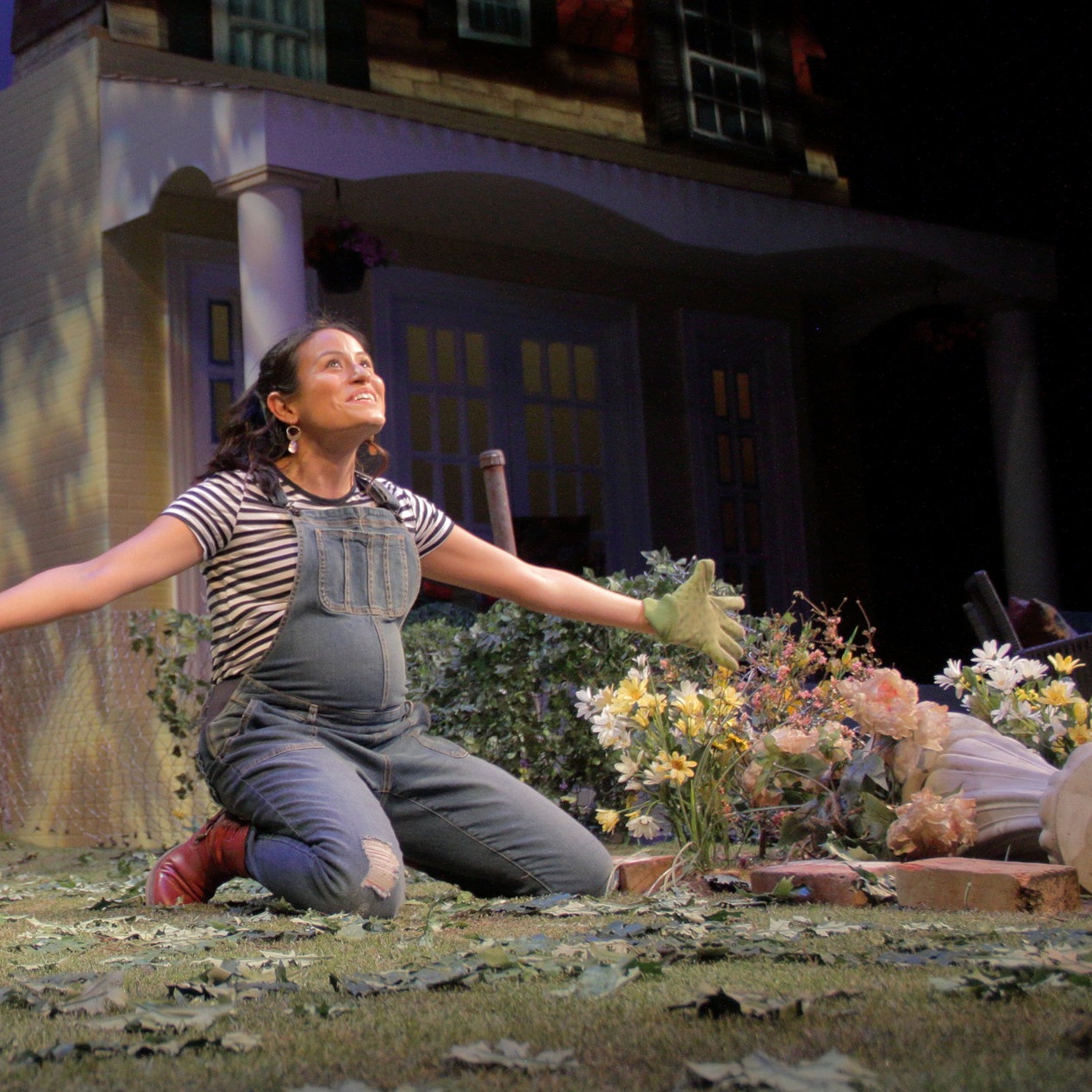 At least the fight over the border wall in the latest Virginia Stage Company production, “Native Gardens,” promises some laughs.
But thorny issues of race, what it means to be American, and what it means to be civil in a time of discourse, are still there in the popular comedy that opens this week…. 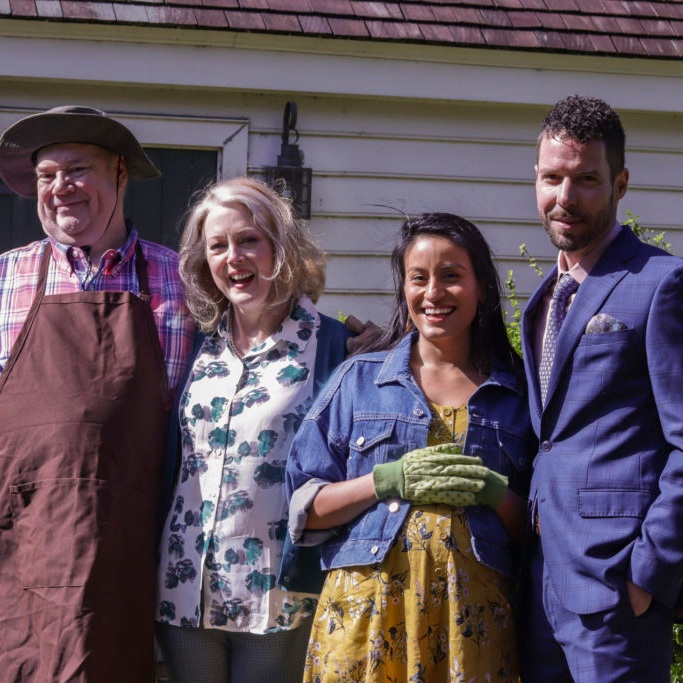 Very little is left of an intense workday of rehearsal that preceded my current interview time with director Tinashe Kajese-Bolden, and actor John Ahlin, inside of a non-descript, 9th floor rehearsal space in downtown Norfolk. It’s the early evening of a still… 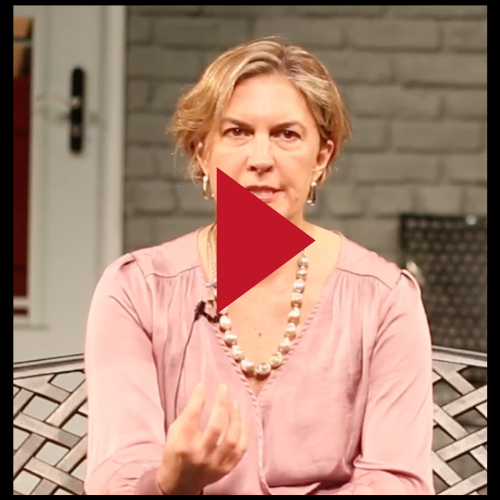 Learn more about the show—Check out this video interview playwright Karen Zacarías by Hola Cultura, produced during Arena stage's production of Native Gardens.

(Director) Originally from Zimbabwe, Tinashe was recently named the Artistic Director Fellow for the Alliance Theater season 2019-2020. She is an award winning Director and Actor grateful for the opportunity to explore stories that help us connect more as a community. As a Director, previous productions include Nick’s Flamingo Grill (World Premiere, The Alliance Theater), Eclipsed at Synchronicity Theater (Best Director, Suzi Bass Award); Graveyard Shift (finalist for the Kendeda National Graduate Playwriting Competition); Atlanta 24 Hour Play event with Working Title Playwrites; In The Continuum at Clark Atlanta University, and Blood On A Cat’s Neck at Armory Theater. She will next be directing Ghost by Idris Goodwin at the Alliance Theater, School Girls (Or the African Mean Girls) at Kenny Leon’s True Colors and the Pulitzer Prize winning play Sweat by Lynn Nottage on the new Coca-Cola Stage at the Alliance Theater, to name a few. As an actor, she has worked on and off Broadway and at numerous regional theaters. Some memorable TV/Film appearances include the NAACP Image Award nominated mini-series “The Bobby Brown Story”; “Valor” (The CW),” The Inspectors” (CBS),“The Immortal Life Of Henrietta Lacks” (HBO), “Killing Reagan” (TV Film),”Outcast” (Cinemax),“Powers” (Sony), “Greenleaf” (OWN),“Born Again Virgin” (TV ONE), “Enlightened” (HBO), “Cold Case”, (CBS). My eternal gratitude and love to my husband, my partner, Keith, for always pushing me to never give up! To my precious boys for giving me a reason to always stand in truth, and my Mom for helping us reach for the stars.

(Set Designer) is the Executive Director of Zeiders American Dream Theater and a freelance scenic designer. Prior to The Z, she worked at Virginia Stage Company, starting as Props Master and then as Production Manager. She has also worked for American Repertory Theatre, Williamstown Theatre Festival, and Texas Shakespeare Festival. Local designs include Grounded, The Taming of the Shrew, Frankie and Johnny in the Claire de Lune, The Comfort Team, Raisin in the Sun, Billy Bishop Goes to War, and Hank Williams: Lost Highway, all at VSC, and Hair at ODU.

(Lighting Designer) Jason's career has spanned 27 years, designing over 600 shows, including thought provoking plays by Suzan-Lori Parks, George Brant and Anna Deavere Smith and iconic musicals such as Ragtime, Tommy, Next to Normal, and Hairspray. His work has been seen off-Broadway with Austin Shakespeare’s Anthem. Regionally, Virginia Stage Company's Grounded, The Wiz, The Tempest, and Crowns. Virginia Musical Theatre's Jekyll and Hyde, Mamma Mia, and many others. He has toured internationally, designing dance at Jacob’s Pillow, Lincoln Center, the Smithsonian and the National Theatre in Taiwan. Recently, Jason was honored to assist Pat Collins on Virginia Opera's Der Freischütz, directed by Stephen Lawless. Jason has received 40 regional awards for his lighting in shows. www.jasonamato.com

(Sound Designer) ) is the resident sound engineer at the Virginia Stage Company. Usually you can find him mixing musicals at the Wells such as The Wiz, Ring of Fire, Always...Patsy Cline, and the newest version of A Christmas Carol, but is glad to have the opportunity to put a design of his own in motion again. His past designs at Virginia Stage Company include A Streetcar Named Desire, Santaland Diaries, and Pride and Prejudice. He is happy to be working with his cast and production staff to put another production together.

(Casting) Binder Casting, now part of RWS Entertainment Group, was founded by Jay Binder, CSA in 1984. Binder Casting has cast over 80 Broadway productions, dozens of National Tours, off-Broadway shows, full seasons for over 25 regional theatres, as well as feature films, episodic television and commercials. Binder has cast for Encores! at New York City Center since its inception in 1994. The office was also featured in the documentary, Every Little Step. Binder Casting is a twelve–time recipient of the Artios Award. www.bindercasting.com

(Stage Manager) is pleased to be joining Virginia Stage Company for the first time.  Ms. Wells has worked in live theater, educational tours and events, opera, jazz, fashion, television, live events, and festivals. Past work includes: Sweat among several others (Pittsburgh Public Theater), Hair (Pentangle Arts), The Long Walk (Pittsburgh Opera), Misery (Penobscot Theater), Wait Until Dark  among others (St. Michael's Playhouse), Fences and Choir Boy (JAG Productions),  The Mask of Moriarty among others (Pittsburgh Irish and Classic Theater). Ms. Wells serves as the Corresponding Secretary for the Stage Managers’ Association, is a graduate of Carnegie Mellon University School of Drama, and a proud member of Actors’ Equity Association.

(Producing Artistic Director) is the sixth Artistic Director and the first Producing Artistic Director in Virginia Stage Company’s 40 year history. At the Wells Tom has directed Pride and Prejudice and The Santaland Diaries, and can't wait to tackle Matilda at the end of this season. Previously as Artistic Director of Cape Fear Regional Theatre (CFRT), Tom produced over 35 plays and directed the World Premiere of Downrange: Voices from the Homefront, a play based on interviews with military spouses from Fort Bragg. Tom is an Associate Artist at PlayMakers Repertory Company in Chapel Hill where he directed An Enemy of the People, Shipwrecked! An Entertainment, The Life and Adventures of Nicholas Nickleby, and The Little Prince. He also directed The Little Prince at the 2007 Edinburgh Fringe Festival. As the founder of FreightTrain Shakespeare in Los Angeles, he earned a Dramalogue Award for his direction of Pericles. Other Los Angeles credits range from King Lear to The Devil With Boobs. A member of the Stage Directors and Choreographers Society, Tom is a graduate of Wesleyan University (Middletown, CT) with a B.A. in Theatre and Economics, and the University of California, San Diego MFA directing program, where he was the assistant director on the original production of The Who’s Tommy. Tom and his wife Wallis are the proud parents of Mireille Julia and Annika Christine.

(Managing Director) Virginia Stage’s 40th Anniversary Season marks David’s second full season as Managing Director. Prior to landing in Norfolk, David served as Managing Director at Clarence Brown Theatre in Knoxville, TN. He has also held leadership positions at Westport Country Playhouse, American Dance Festival, Triad Stage, Yale Repertory Theater, the Dwight/Edgewood Project, and the Guthrie Theater. David received an MFA degree in Theater Management from Yale School of Drama and a BA degree in Drama from UNC-Greensboro in his native North Carolina. During his tenure at the Clarence Brown Theatre, David was appointed to the Chancellor’s Commission for LGBT People and the College of Arts & Sciences’ Diversity Committee. Additionally, David served on the McClung Museum Academic Programs Advisory Board and the Great Schools Partnership Advisory Council. David has been a grants panelist for the National Endowment for the Arts, Tennessee Arts Commission, and United Way of Greater Knoxville. He has served on the union negotiating team and annual meeting planning committees for the League of Resident Theatres (LORT). David was a 2016 Knoxville Business Journal 40 Under Forty Honoree and has recently guest lectured at Virginia Wesleyan University and Christopher Newport University.

(Pablo Del Valle) is delighted to make his Virginia Stage Company debut with Native Gardens. Some of his Off-Broadway credits include Prince Dolgorukov from Pushkin (hailed by the Wall Street Journal as one of the best new productions of 2018) and Frank from the east coast debut of Hilda by Marie NDiaye. Other New York Credits include Manuel from Illuminating Veronica by Rogelio Martinez and Edmund from a staged workshop of King Lear at The Public directed by James Lapine, with Kevin Kline as the title character. Regional credits include Mr. Wabash from Shakespeare In Love (Cincinnati Playhouse in the Park / Baltimore Center Stage) and Soranzo from 'Tis Pity She's a Whore (ACT, San Francisco). He has also worked in Television (Kings, Law & Order, One Life to Live), Film (the award winning short film Sunday), and New Media (Spring Street). He holds an MFA from the famed NYU Graduate Acting program.

(Surveyor/Landscape Technician) is ecstatic to be making his VSC debut. As a local actor, Miguel has been on the boards of many area community theaters such as Generic Theatre, Little Theatre of Norfolk, Williamsburg Players, PCT, and Panglossian. Other notable stage appearances include Solario/Solarino in The Merchant Of Venice, Sir Eglamour in Two Gentlemen of Verona and Messalla in Julius Caesar at the Virginia Shakespeare Festival, Morrocco/Solario/Duke/Tubal in The Merchant of Venice at Quill Theater, as well as Officer Murphy in A Street Scene with the Virginia Opera.

(Virginia Butley) is marking 30 years as a professional actor this year. Amazing. Grateful. Where does the time go?  Some highlights along the way have been Audrey in As You Like It Shakespeare Theatre Company DC; Mamie in the world premiere of The Passion of Teresa Rae King Triad Stage; Satan in the world premiere of Analog & Vinyl Weston Playhouse; Edie & Big Edie in Grey Gardens TheatreWorks (San Fran Critics Best Actress Award); Cora in Counsellor at Law Peccadillo Theatre Off-Broadway; Lily in Take Me Along Irish Rep. Off-Broadway; Blanche in A Streetcar Named Desire, Pendragon Theatre. 6 Broadway national tours; national commercials, TV & Film.  Latest film Beyond the Night is now in wide release. For more info please visit www.Beth-Glover.com.  So happy to be adding this great theatre and production to the highlights. Love and thanks to TKB & KL.

(Tania del Valle) is a New York City based actor, born and raised in Los Angeles, California. Regional Theatre: Wolf at the Door (NJ Rep) Paloma (Kitchen Theatre Company) An Act of God (Wellfleet Harbor Actors Theatre) NY Theatre: Are We Human (New Ohio Theatre) LA Theatre: Den of Thieves (Stella Adler LA) Chicanas, Cholas, y Chisme (Casa 0101) Workshops: Used to Was, Maybe Did (Center Theatre Group ) The Madres (San Diego Rep) She writes, acts and produces content with comedy sketch group In the Moment. Trained at Stella Adler, Los Angeles. She is grateful to be a part of this production and for the great cast and team behind it.

(Building Inspector/Landscape Tech) is pleased to be back at the VSC and on the live stage!  Always educating himself, Joey spends his time reading, traveling, and carefully observing life quotidian. When not studying, he enjoys times with good friends and gym-ratting.  He would like to send a special thanks to Emel Ertugrul and also to Roberto and Luz Lida Octaviano.

(Landscaper) was born and raised in Virginia Beach. Having spent the last year studying at The Actors Place and The Funny Bone, training at Upright Citizens Brigade NYC, and performing at Push Comedy Theater, he recommitted to being a performance artist after a 12 year hiatus from the stage. Catch him at your local club doing stand-up comedy or with his sketch and improv group, Lemon Pepper & Sazón Comedy.