Jessica Holt was researching Thanksgiving pageants for her current Virginia Stage Company production when she came across a revealing photo.

It was a scene from a 1920 play in which a group of white actors was dressed as pilgrims. Surrounding them were more white actors with painted faces and heads wrapped in feather headbands, an offensive portrayal of Native Americans.

“You can see how these were using redface in such damaging and corrosive ways,” Holt said.

It was the perfect preparation for “The Thanksgiving Play,” which is playing through Feb. 6 at the Wells Theatre.

The play was written by Native American playwright and choreographer Larissa FastHorse in 2015. She is based in Santa Monica, California and is a member of the Sicangu Lakota Nation.

The play is about “performative wokeness,” FastHorse said during a 2018 interview with Playwrights Horizons. The play follows four white people crafting a “culturally sensitive” Thanksgiving play for children during Native American Heritage Month.

Tom Quaintance, producing artistic director at VSC, reached out to Holt last summer. He thought Holt — a white, queer, cisgender woman — had the perspective and cultural understanding to direct the play. Holt was initially hesitant since she’s not Native, but the more she read, the more comfortable she felt.

“This play is lampooning and making fun of white folks for 90 minutes,” Holt said. “You need to have the perspective of whiteness in the room because ultimately, that’s what the play is about. It’s about these white folks that are all trying to do the right thing and are finding the limits of white progressivism.”

To direct the performance, she read up on early Thanksgiving plays and pageants, which “mystified” Native Americans and melded them into one idea when in reality, they’re quite diverse.

For example, there are currently 11 tribes recognized in Virginia, including the Mattaponi, Upper Mattaponi and Pamunkey. In Hampton Roads, members of the Nansemond tribe live in Suffolk and Chesapeake, while those in the Cheroenhaka Nottoway and Nottoway tribes live in Southampton County, according to the Commonwealth of Virginia website.

There are also groups like the Red Crooked Sky, a Virginia-based American Indian dance troupe, Holt said. The troupe is based in southeastern Virginia and represents a host of tribes, including Cherokee, Nansemond, Sioux, Meherrin, Osage, Seneca and Monacan.

Mohler teaches theater at the Butler University in Indianapolis, Indiana and is the associate dean for inclusion, diversity, equity, and access for the university’s Jordan College of Art.

She shared scholarly articles with the cast and crew about issues such as white privilege, white identity and allyship.

Mohler said the play is extremely funny and illustrates how American theater frequently leaves out Native American perspectives and characters, which is incredibly damaging.

For example, November kicks off the holidays for most Americans. It’s also Native American Heritage Month, so the two often get pushed together in people’s minds, she said.

“Like, ‘Oh, yeah. Thanksgiving is there. And Indians are there. That’s the beginning of America,’” she said. “Unfortunately, that story totally ignores the fact that America was not discovered by Europeans.…Indigenous people were already here with civilizations and languages and cultures, their own belief systems, their own governmental systems, their own art.”

That part is often overshadowed in U.S. history lessons by tales of Native people greeting Pilgrims with corn and other foods. Also erased are the diseases and genocide that killed thousands of Indigenous families.

The play highlights issues such as white privilege, white identity and “wokeness” through comedy and satire, which are different, according to FastHorse and Holt.

“Satire is more biting than comedy,” Holt said. “It doesn’t let us off the hook. We are given permission to laugh with comedy; the satire means we are also laughing at ourselves. This satire deliciously roasts these four well-meaning white allies who are trying their best to tell a socially responsible Thanksgiving play that both honors Thanksgiving AND Native American Heritage Month and are epically failing.”

The play, in turn, creates a space for viewers to get over their fear of making mistakes, to laugh at themselves and learn more about how to be real allies. That means checking privilege and, in some cases, giving up that privilege.

Mohler, the consultant, said the play is humorous because the characters are desperate to do an impossible thing — produce a culturally sensitive play for elementary school students that’s also accurate.

The characters either have to admit the violence that happened toward Native people or perpetuate a lie.

The characters, she said, come to a conclusion that many well-meaning allies come to.

Audiences are “really going to laugh hard and then they’ll also be thinking hard about why they were laughing; that’s my favorite combination.”

HAMPTON ROADS, Va. - How does one celebrate Thanksgiving and Native American Heritage Month at the same time? In Larissa FastHorse’s biting satire, this is the question facing three “woke” white thespians tasked with devising an elementary school pageant about the first Thanksgiving while avoiding any culturally appropriative missteps. Ryan Clemens, who will be playing Jaxton in Virginia Stage Company's production of "The Thanksgiving Play", joins us with the details.

Norfolk, VA - When a collection of teachers are challenged to write a play about the History of Thanksgiving, hilarity and challenging questions ensue in Larissa FastHorse’s (Sicangu Lakota) gripping comedy The Thanksgiving Play to open at The Historic Wells Theatre (108 E. Tazewell Street, Norfolk VA) from January 22nd to February 6th.

When well-meaning and slightly radical educator Logan is challenged to create a play about the origin of Thanksgiving, she recruits her yoga-loving boyfriend Jaxton to assist her and fellow history teacher Caden in writing an educational play about the origins of Thanksgiving, and addressing the perspectives of the Native Americans not heard in the story’s original telling. After Logan’s failed past educational productions, parent outcry threatens her job if the play doesn’t go well, so with the help of a grant she recruits Alicia, an “authentic” Native American actor from L.A. to lend her “unique perspective in the development of this play. Through a series of witty jokes, quick wit, and only slightly-veiled probing questions; Larissa FastHourse (Sicangu Lakota) asks the audience how we have told a story for so long without asking the very people this story was about.

Larissa FastHorse (Sicangu Lakota) workshopped this masterclass production in satirical performance at UC Berkeley in 2015 following it’s writing and inception in Ireland as part of the Joe Dowling Fellowship. It was then workshopped in Portland, Oregon at the Artists Repertory Theatre before making it’s way to a world premier at Playwrights Horizons in New York City on October 12, 2018. In an interview with The Interval before the world premier of the production, Larissa shared her insights on the process and importance of the work:

“I think if we wrote down everything I’ve experienced as an Indigenous person in this country just walking down the street, it would be such a depressing tragedy that no one would want to watch it. So instead, I made a comedy, within a satire, to make it a little more fun for everybody. [In the play] we have some very well-meaning liberal white folks that are in charge of creating this play that’s supposed to be for children. It’s supposed to be educational and enlightening and progressive, and all the good things for Native American Heritage Month and Thanksgiving—and, for me, it’s always ironic that we have Thanksgiving and Native American Heritage Month at the same time. It’s always been fascinating to me that we have this really problematic holiday that’s supposedly celebrating Native American people and coming together, but in reality, A.) everything we’ve learned about it is a fiction, and B.) the potential true origins of Thanksgiving are incredibly gruesome and really horrible and have nothing to do with peace and happiness, and they’re actually about genocide. So obviously that means comedy. I hope what these folks that I’m actually talking about in my play take away from it is this: let’s just all make the mistake together, let’s all be ridiculous together, and then that gives us somewhere to go. If I know where you’re coming from, you know where I’m coming from, and you can make mistakes, and I can make mistakes, and we can all get kind of crazy and yell at each other, but keep moving forward, that’s going to change everything. It truly will.”

Virginia Stage Company is requiring proof of vaccinations or a negative PCR COVID Test Result administered within 72 hours of entry to it’s productions. Only results provided by an FDA approved PCR test from a Medical Healthcare Professional, Lab, or Pharmacy will be accepted. Images of the front and back of the card will be accepted in lieu of the physical card, and masks will be required of all guests and individuals present in the space. For a full list of our entry procedures, please visit www.vastage.org/entry.

Performances of The Thanksgiving Play are scheduled Wednesday - Saturday at 7:30pm, Saturdays at 2pm and Sundays at 3pm at The Historic Wells Theatre, located at 108 E. Tazewell Street, Norfolk Va. Tickets range from $25 - $68. Subscription packages for Virginia Stage Company include a four show package starting at $120.00, or our flexible Theatre on Demand Packages starting at $196.00. Season Ticket holders receive numerous benefits, including 20% savings on every show, unlimited exchanges with no exchange fees, and additional discounts for in-house concessions and drinks.

Subscription packages and single tickets are on sale by calling the Box Office at (757) 627-1234 Monday through Friday from 10am - 5pm or visiting https://tickets.vastage.org/packages

Interviews can be arranged by contacting Director of Marketing, Maris Smith, at msmith@vastage.org.

Virginia Stage Company is Southeastern Virginia’s leading theatre destination, serving an audience of over 58,000 annually, both at the Wells Theatre and throughout the community. Virginia Stage Company’s mission is to “enrich, educate, and entertain the region by creating and producing theatrical art of the highest quality.” 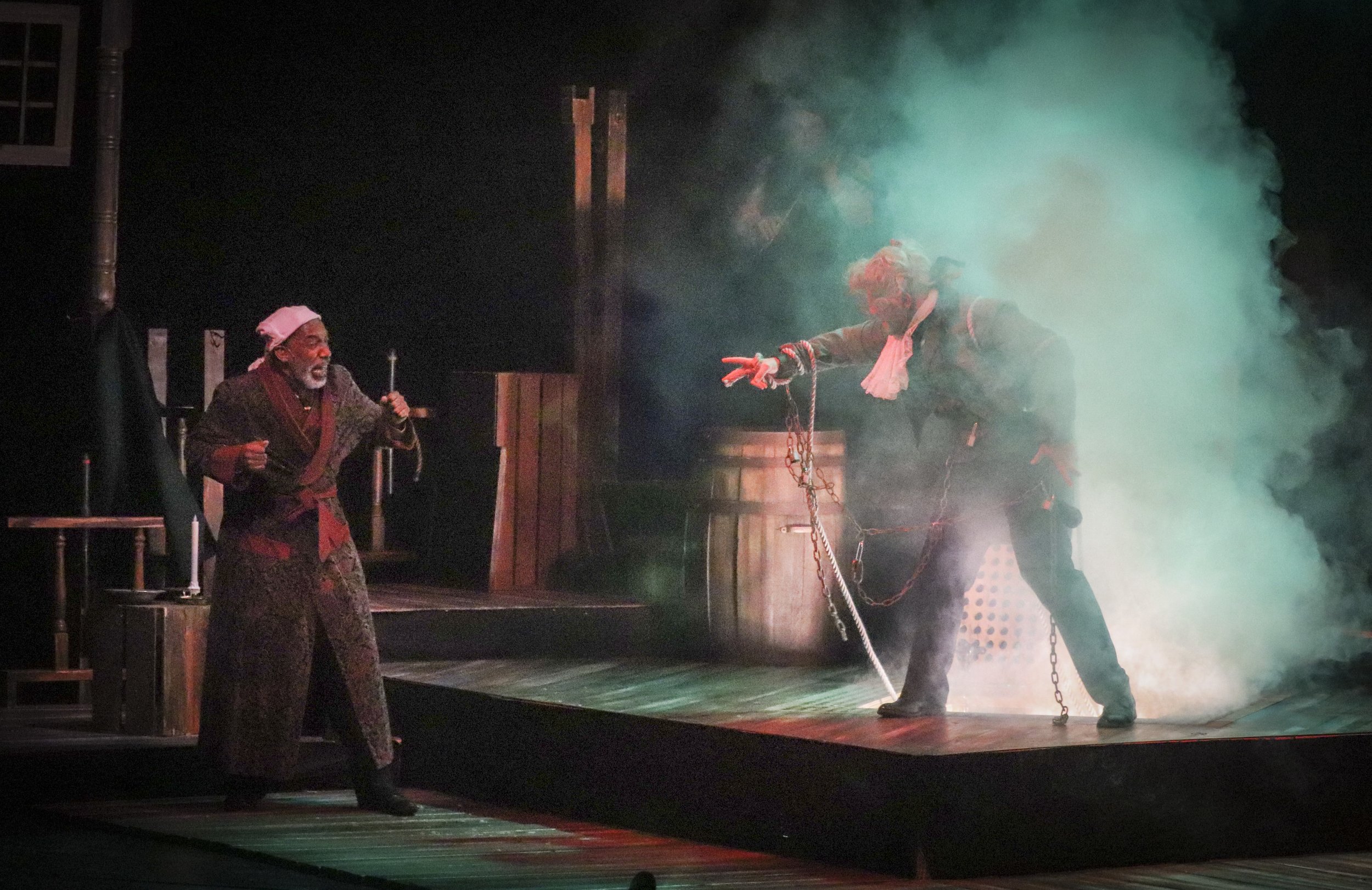 Marley may have been dead to begin with, but A Merry Little Christmas Carol at the Virginia Stage Company’s historic Wells Theatre is full of life. 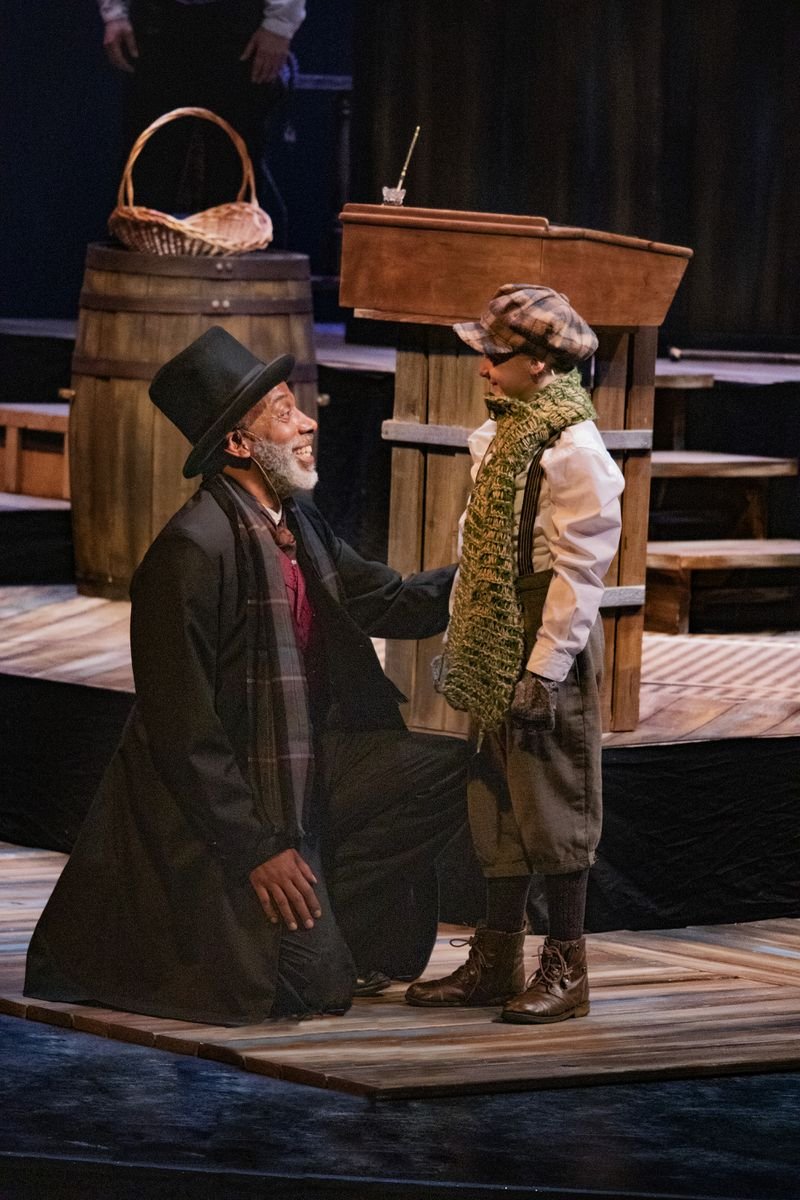 The heavy fog that descends on the Wells Theatre stage announces that the Virginia Stage Company’s “A Merry Little Christmas Carol” will be a play of atmosphere and moods…there is an eeriness in any ghost story, and Dickens’ “A Christmas Carol,” from which this script is adapted, is arguably the English-speaking world’s favorite ghost story. While it has plenty of the expected suspense and hints of tragedy, this version of the three Christmas spirits reforming the old miser Ebenezer Scrooge is dominated by high-spirited joy, laughter and ebullient glee. 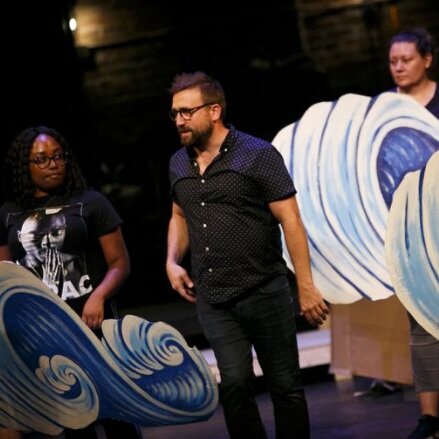 In this time of crisis, the need for stories — stories that move and entertain and challenge us — is obvious. The necessity of music that moves the soul and moves the spirit is crystalline. The desire to be taken out of ourselves has never been more achingly clear… 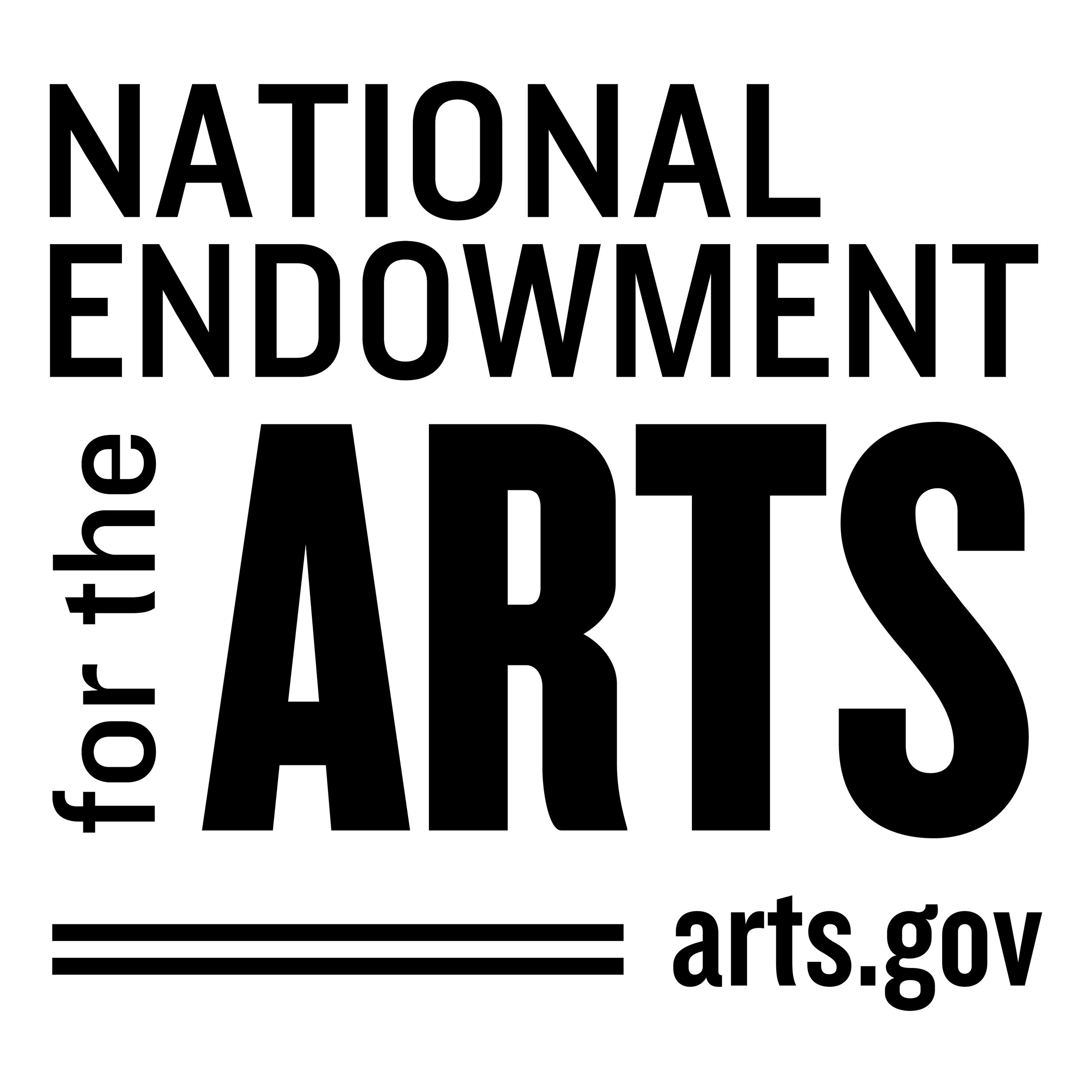 Virginia Stage Company has been approved for a $20,000 Art Works grant to support a world premiere theater production by Ronve O'Daniel and Jevares Myrick, co-creators of contemporary hip-hop musical Once Upon A Rhyme: A Musical Tale.  Mr. O’Daniel and Mr. Myrick will write a hip-hop musical that will serve as both education and a celebration of the unique history of the Hampton Roads community.